Status:
Recruiting
Clinicaltrials.gov identifier:
NCT03055013
Sponsor:
National Cancer Institute (NCI) with Canadian Cancer Trials Group as Collaborators
Enrollment:
805
Study Design:
This Phase 3 study enrolls patients with clinical stage > T2 or node positive M0 RCC of any histology or patients with oligometastatic disease that can be resected or definitively treated. A tumor biopsy is mandatory prior to randomization. Patients randomized to one arm of the trial will receive two doses of perioperative nivolumab prior to nephrectomy, followed by 9 months of adjuvant nivolumab after nephrectomy. Patients randomized to the other, control arm of the trial will undergo nephrectomy followed by observation. Patients will be stratified by clinical T stage, node positivity, and histology.
Rationale:
Despite multiple studies evaluating adjuvant therapy in patients with localized RCC after nephrectomy, largely involving vascular endothelial growth factor (VEGF) tyrosine kinase inhibitors (TKIs), there remains no standard adjuvant systemic therapy that increases overall survival. While a number of adjuvant trials are underway to determine if there is a role for immune checkpoint inhibitor therapy in treatment of localized RCC, it is hypothesized that neoadjuvant PD-1 priming may be necessary to maximize efficacy. Thus, the PROSPER RCC trial is a novel trial involving perioperative nivolumab in patients with RCC undergoing nephrectomy.
Endpoints:
The primary endpoint of the trial is recurrence free survival (RFS), assessed up to 10 years. The secondary endpoints include overall survival (OS), RFS for patients with clear cell RCC, and incidence of toxicity. The study also plans to evaluate the primary tumor’s expression of PD-L1 as well as the expression of PD-L1 on tumor tissue at time of recurrence, among other potential correlative studies.
Comments:
This multi-center NCI-sponsored trial continues to require the engagement of investigators treating patients with RCC. As mentioned, there is no adjuvant therapy established to prolong overall survival in patients with localized RCC. While sunitinib has been demonstrated to improve progression-free survival, toxicity concerns with long-term VEGF TKI use remains a major concern. Thus, the role of immune checkpoint inhibitor therapy in this context is critical. However, more importantly, unlike the other adjuvant immune checkpoint inhibitor trials, PROSPER RCC asks important questions about the tumor immune microenvironment and the impact of the primary tumor on the effects of nivolumab. Recent amendment to the protocol now allows for patients with oligometastatic disease as long as all sites of metastases are surgically resected or definitively treated within 12 weeks of nephrectomy. Another amendment now requires core tumor biopsy for patients randomized to the nivolumab arm only, rather than both arms of the trial. These amendments should further encourage patient enrollment.

Click here for more information
on advertising with KCA 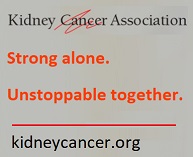